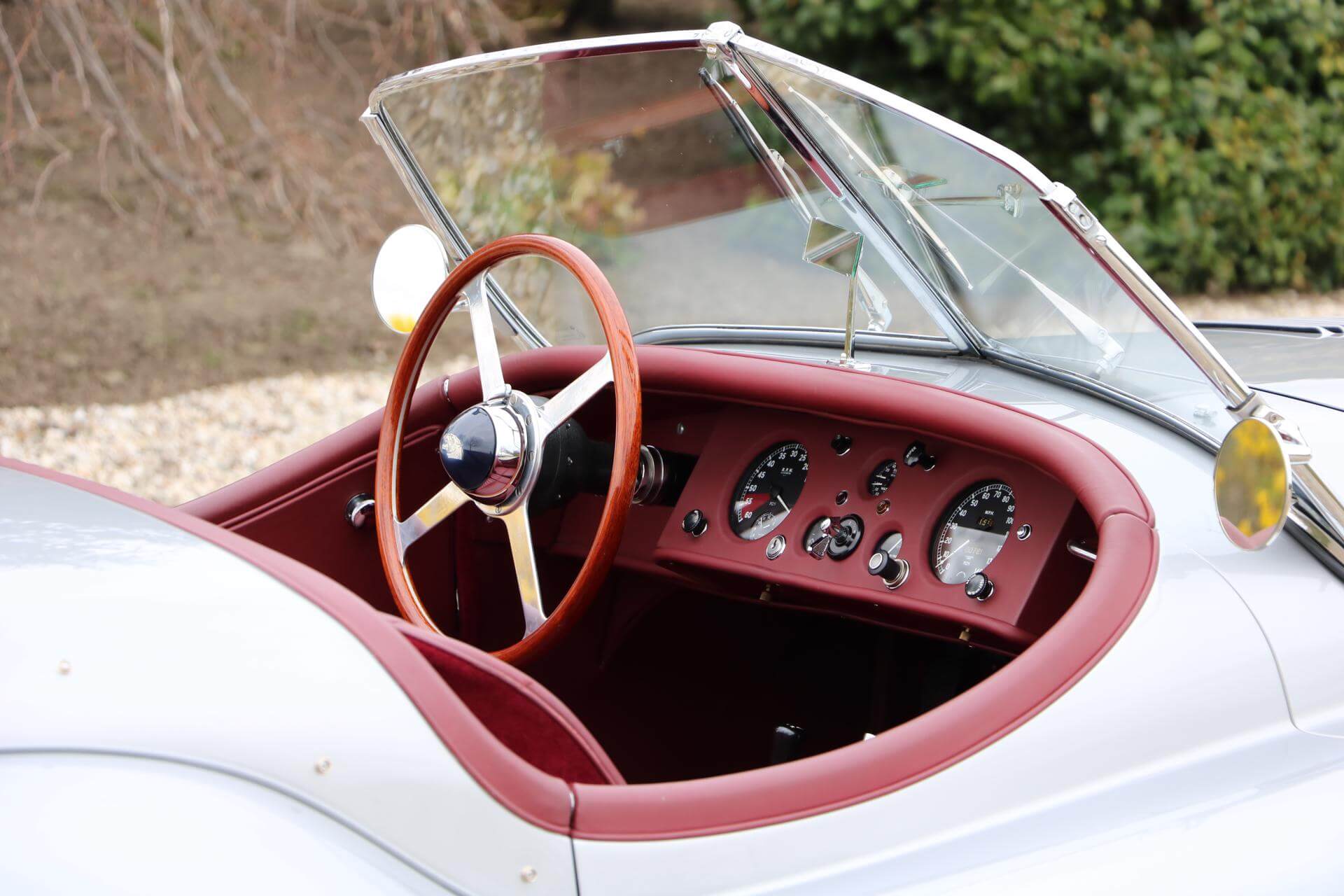 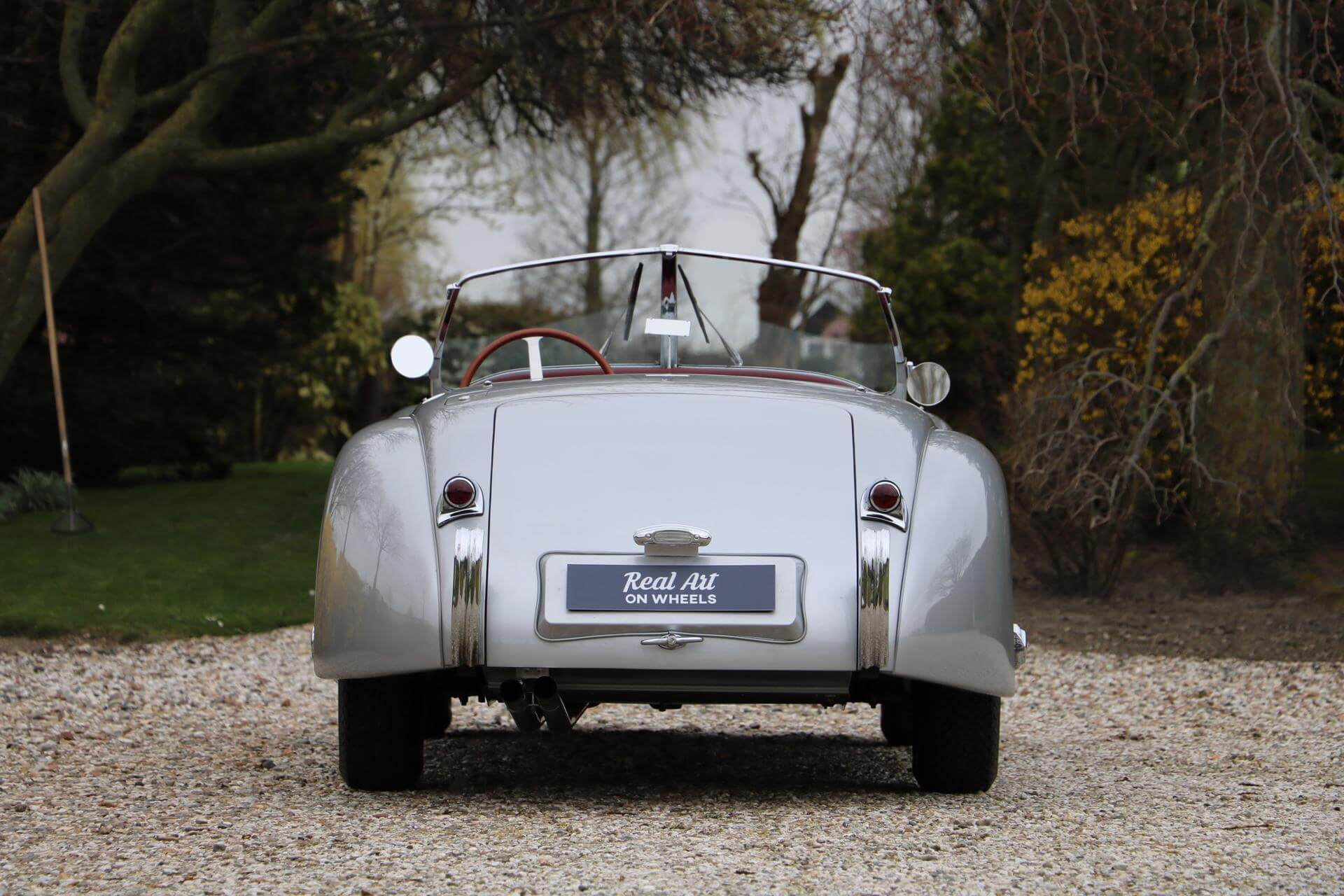 SOLD!
Matching numbers and colors
Completely restored, less than 1,000 KMs since restoration
Including upgrated 5 speed gearbox and disc brakes
Currently registered in The Netherlands and ready to be enjoyed

The Jaguar XK 120 was launched at the 1948 London Motor Show as a testbed and show car for the new Jaguar XK engine designed by William Heynes Chief Engineer. The sports car caused a sensation, which persuaded Jaguar founder and Chairman William Lyons to put it into production. Beginning in 1948, the first 242 cars wore wood-framed open 2-seater bodies with aluminium panels. Production switched to the 51 kg heavier all-steel in early 1950. The “120” in the name referred to the aluminum car’s 120 mph (193 km/h) top speed (faster with the windscreen removed), which made it the world’s fastest production car at the time of its launch.
The Jaguar XK120 was ultimately available in three versions or body styles, first as an open 2-seater described in the US market as a roadster (OTS) then as a fixed head coupé (FHC) from 1951 and finally as a drophead coupé (DHC) from 1953, all two-seaters and available with Left (LHD) or Right Hand Drive (RHD). However, certain Special Equipment roadster and fixed head coupe cars were produced between 1948 and 1949 denoted by an ‘S’ preceding the chassis number. These Special Equipment cars were sold as an early production build for enthusiasts.
On 30 May 1949, on the empty Ostend-Jabbeke motorway in Belgium, a prototype XK120 timed by the officials of the Royal Automobile Club of Belgium achieved an average of runs in opposing directions of 132.6 mph with the windscreen replaced by just one small aero screen and a catalogued alternative top gear ratio, and 135 mph with a passenger-side tonneau cover in place. In 1950 and 1951, at Autodrome de Linas-Montlhéry, a banked oval track in France, open XK120s averaged over 100 mph for 24 hours and over 130 mph for an hour. In 1952 a fixed-head coupé took numerous world records for speed and distance when it averaged 100 mph for a week. The Jaguar XK120s were highly successful in racing and rallying.

This left-hand drive Jaguar XK120 Roadster was delivered to the USA in May 1952 finished in silver with red interior, the same color combination it has today. In 2014 the car was imported into the UK and has formed part of his ‘Springbourne Collection’, which features a British car from every decade, this XK120 representing the 1950s.
In 2014, this Jaguar XK120 Roadster was treated to a full restoration, including a total engine rebuild, by a retired Classic Motor Cars employee. All bodywork and paintwork refurbishment was done by Brookfield Classics and Classic Motor Cars. In essence, this car has been restored by some of the best Jaguar specialists in the Midlands where it originated. The only concessions to modern-day convenience are a Cosworth five-speed gearbox, extended pedal box for taller drivers, bonnet louvres to assist engine cooling, disc brakes to the front, a non-standard steering wheel, and bucket seats.

The XK was specified to be a practical and fast classic road car. It has been used once at the Shelsley Walsh hill climb but has largely been cosseted as part of the private Springbourne Collection; indeed, only some 1,000 ‘shakedown’ kilometres have been covered since the restoration’s completion in 2014. Offered with a Jaguar Heritage Certificate and Dutch registration document, the car comes with an unused red tonneau (matching the hood cover), a jack, and a spare spoked wheel.

This Jaguar XK120 Roadster is for sale. Please don’t hesitate to contact us for further details or an appointment.