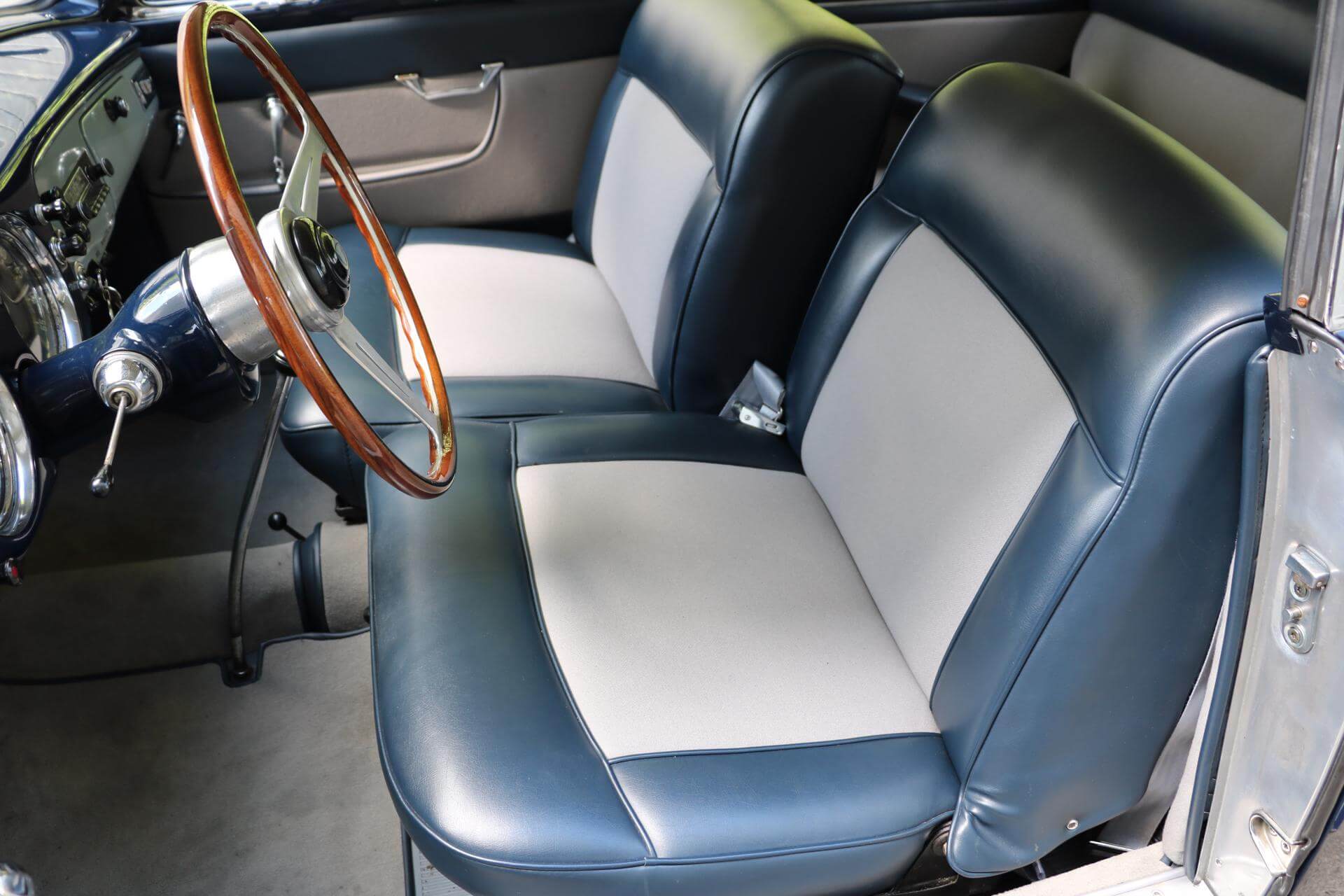 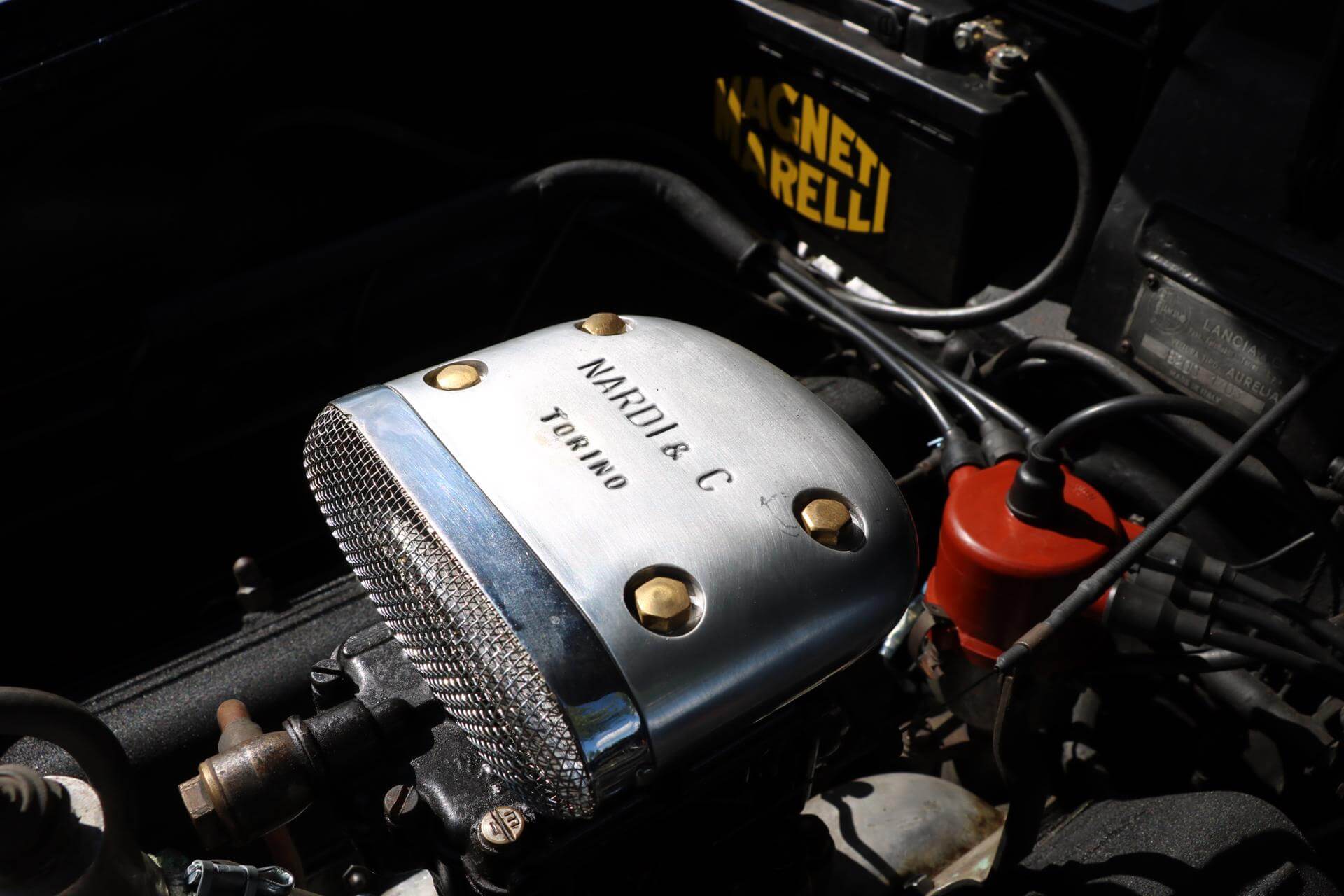 Sold, thank you!
Desirable Nardi upgrades
The last decade part of an important collection
Recently technically checked and serviced
Ready to be enjoyed

The very first Lancia Aurelia was the Sedan – known as the B10 Berlina. They used a 1754 cc version of the V6 engine. The Aurelia B21 was released in 1951. They were equipped with a larger 1991 cc 70 horsepower engine. A 2 door B20 GT coupe appeared that same year. This car had a shorter wheelbase and a body built by Pinin Farina and was designed by Ghia. The same 1991 cc V6 engine produced 75 hp in the B20. In all, 500 first series Aurelias were produced.

The second series Lancia Aurelia pushed power to 80 horsepower due to a higher compression ratio and repositioned valves. Other changes included better brakes and minor styling tweaks, such as chromed bumpers instead of the aluminium ones used in the earlier car. A new dashboard featured two larger instrument gauges. The suspension was unchanged from the first series. A new B22 sedan was released in 1952 with dual Webers and a hotter camshaft for 90 hp.

The third series appeared in 1953 with a larger 2451 cc version of the engine. The rear of the car lost the tail fins of the earlier series. The fourth series introduced the new de Dion tube rear suspension. The engine was changed from white metal bearings to shell bearings. An open car, the Lancia Aurelia B24 Spider, was introduced at this time (1954 and 1955) and was well received. It was similar to the B20 coupe mechanically, with a 203 mm shorter wheelbase than the coupe.

The fourth series cars were the first Aurelias to be available in left-hand drive; fourth series Aurelias were the first ones to be imported to the US in any number. This model was immortalized by Dino Risi’s 1962 movie Il Sorpasso (“The Easy Life”), starring Vittorio Gassman. The actual car used for shooting (a single model) was not destroyed during the accident scene sealing the end of the story: an Alfa Romeo Giulietta Spider was used as replacement.

The fifth series coupe, appearing in 1956, was more luxury-oriented. It had a different transaxle (split case), which was more robust and similar to that used in the later Lancia Flaminia’s. The driveshaft was also revised to reduce vibration. Alongside the fifth series coupe’s was a revised open car, the Lancia Aurelia B24 Convertible. This differed from the earlier B24 Spider, having roll-up windows, better seating position, and a windscreen with vent windows. In mechanical aspects, the B24 convertible was similar to the coupe of the same series.

The final generation was the sixth generation Lancia Aurelia B20. The car was equipped with the 2,5 litre V6 (2.451cc) engine that delivered 112 horsepower. With increased torque to offset the greater weight of the later car. The sixth series coupes had vent windows, and typically a chrome strip down the bonnet. They were the most touring oriented of the B20 series. The sixth series B24 convertible was very similar to the fifth series, with some minor differences in trim. Most notably, the fuel tank was in the boot, not behind the seats as it was in the fourth and fifth series open cars. This change, however, did not apply for the first 150 sixth series cars, which were like the fifth series. The sixth series convertibles also featured different seats than either both earlier cars.

In the 1951 Mille Miglia a 2-litre Aurelia, driven by Giovanni Bracco and Umberto Maglioli, finished second, beaten only by a Ferrari 340 America. The same year it took first in class and 12th overall at the 24 Hours of Le Mans. Modified Aurelias took the first three places in the 1952 Targa Florio with Felice Bonetto as the winner and another win on Lièges-Rome-Lièges of 1953. The fifth edition of the Coppa della Toscana netted 1-2-3 victory for the Lancia Aurelia GT 2500 of Scuderia Lancia. One of the most important wins came in 1954 at the Monte Carlo Rally. An Aurelia GT co-driven by Louis Chiron and Ciro Basadonna took the top step of the podium, which was the first of Lancia’s many overall victories at the legendary rally held on the roads above the principality.

Almost immediately after the introduction of the Lancia Aurelia, Enrico Nardi, a specialist tuner with a small shop near the factory, started making  improvements to the motor. For the early Aurelias, Nardi’s revisions focused on installing two carburetors instead of the single that came with the car. He tried another configuration shortly thereafter, with six single-barrel Dell’Orto carburetors. He made setups for the  2-liter motors in the B21 and B22, and then yet another for the later 2.5-liter engines. This latter kit was more widely known with its  two twin-barreled Weber carburetors. Produced in the mid-1950s, this two-carburetor performance kit included new inlet manifolds, a cast-aluminum air cleaner, and a new radiator “Y” pipe.

Nardi offered his own camshaft for the Aurelia, even replacing the factory’s column gearshift with a floor-mounted one. He then expanded into supplying wooden steering wheels for Aurelias and other cars, and at one point, offered studded tires for sale. While other tuners, such as Abarth and Italmeccanica, also offered motor improvements, Nardi was the one most closely aligned with the factory.

This Lancia Aurelia Series VI was originally registered on April 10, 1958. Little is known about its early history, but the car was well-known in the Belgium Lancia scene before the car was aquired at a marque specialist by the previous owner. The previous owner is a good friend of our company and he enjoyed the car for the last 10 years, next to his Flaminia Super Sport Zagato, Appia Zagato and other – mainly – Italian exotics. Once he drove the car to the Monaco Boat Show from Amsterdam, without any problems. With the car we have an overview of all trips he made, with his remarks about the car’s characteristics. In the last decade the car was maintained precisely and all invoices are in file. The car feautures the desirable Nardi upgrades, such as the floorshifter and Weber carburettor setup.

This Lancia Aurelia Series VI is currently registered and ready to be enjoyed. The car comes with as-new Pirelli Cinturato tires and a great history file. Don’t hesitate to contact us for further details.