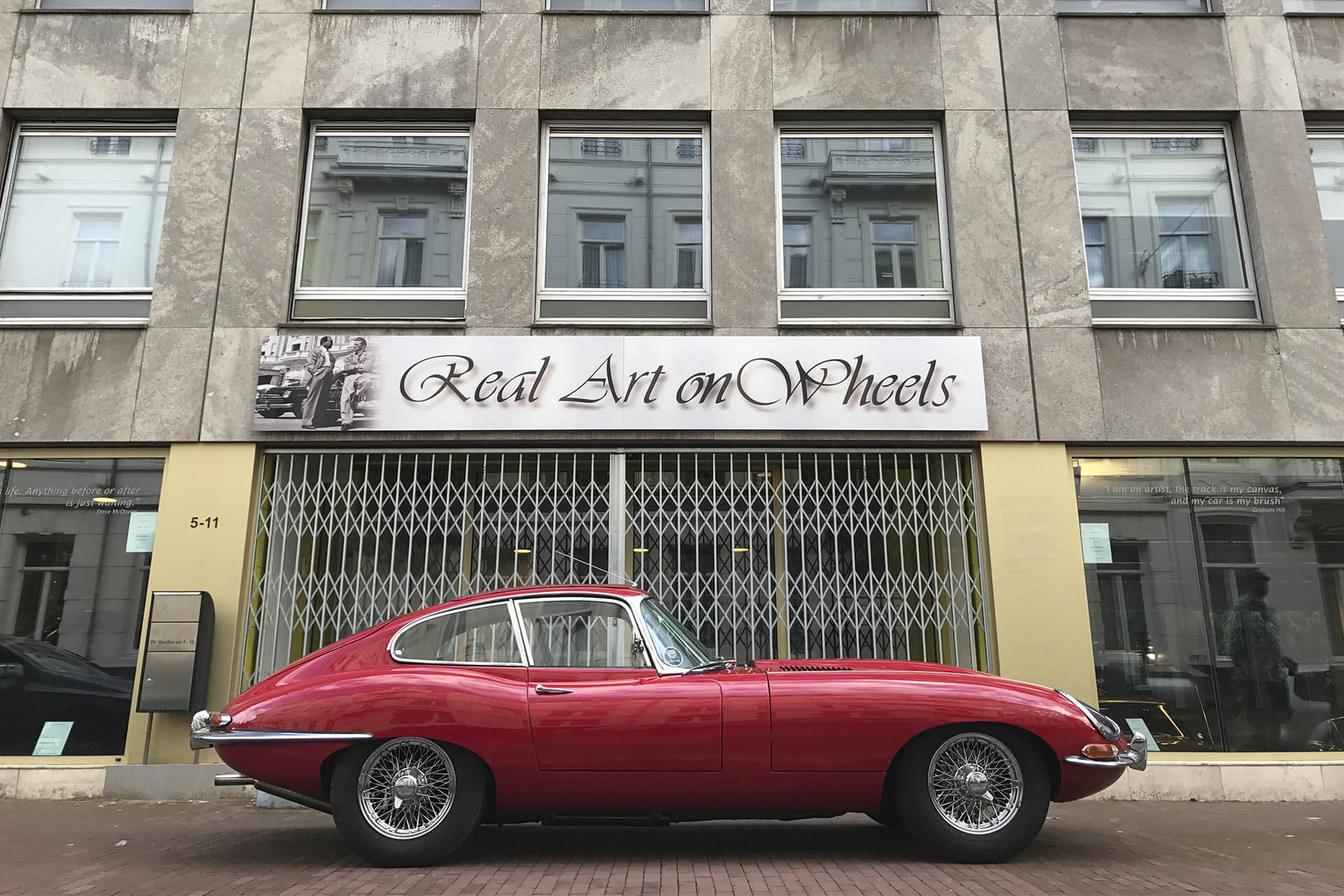 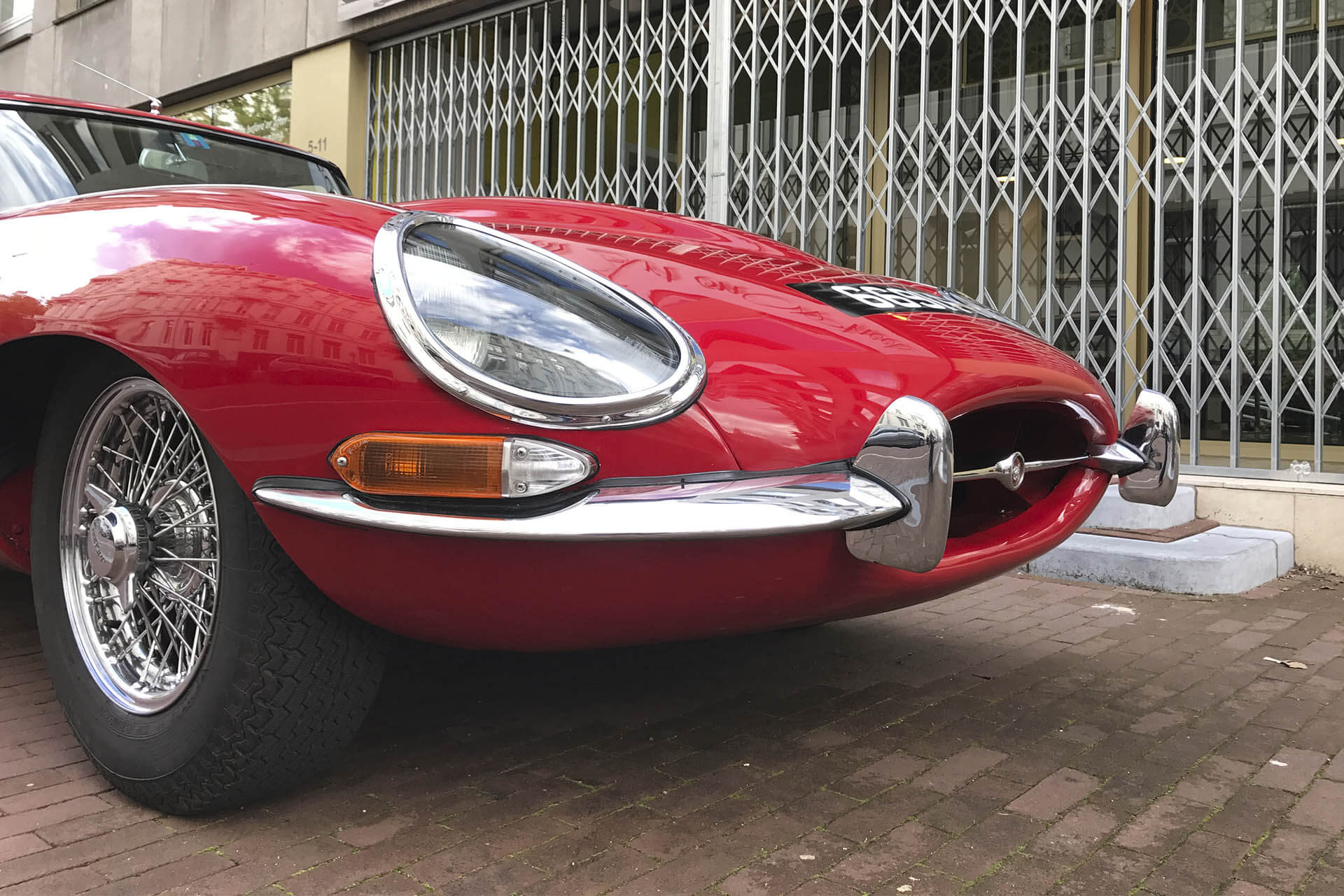 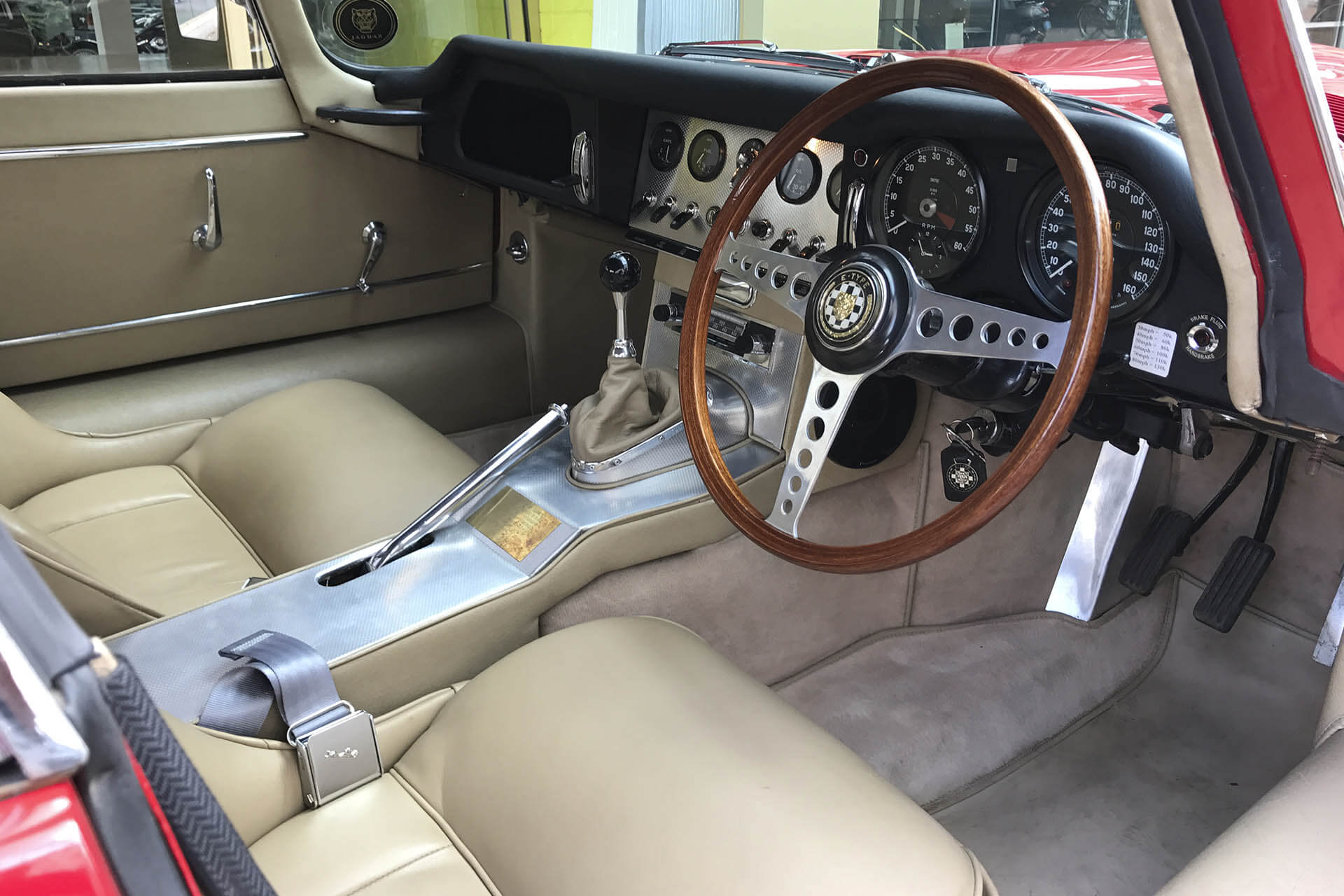 'The most beautiful car ever made', following Enzo Ferrari's statement
Unique features as the Webasto sunroof and five-speed gearbox
Matching numbers
Great history file with invoices, still on its first UK registration

The Jaguar E-Type, also known as the Jaguar XK-E, was in production between 1961 and 1975. Its combination of good looks, high performance and competitive pricing established the marque as an icon of 1960s motoring. On its release Enzo Ferrari called the Jaguar E-Type “the most beautiful car ever made”.

The New York City Museum of Modern Art recognised the significance of the E-Types design in 1996 by adding a blue roadster to its permanent design collection, one of only six automobiles to receive the distinction. In 2007, Sports Car International Magazine placed the Jaguar E-Type at number one on their list of Top Sports Cars of the 1960s. In March 2008, the Jaguar E-Type ranked first in The Dailey Telegraph online list of the worlds “100 most beautiful cars” of all time.

The Series 1 was introduced, initially for export only, in March 1961. The domestic market launch came four months later in July 1961. The cars at this time used the triple SU carburetted 3.8 litre six cylinder Jaguar XK6 engine from the XK150S. Earlier built cars utilised external bonnet latches which required a tool to open and had a flat floor design. Later the twin bonnet latches moved to inside the car.

The 3.8-litre engine was increased to 4.2 litres in October 1964. The 4.2 litre engine produced the same power as the 3.8 litre (265 bhp) and same top speed (150 mph / 240 km/h), but increased torque from 325 to 384 Nm. All E-Types featured independent coil spring rear suspension with torsion bar front ends, and four wheel disc brakes, in-board at the rear, all were power-assisted. Jaguar was one of the first vehicle manufacturers to equip cars with disc brakes as standard from the Jaguar XK150 in 1958.

The Jaguar E-Type Series I can be recognised by glass-covered headlights (up to 1967), small “mouth” opening at the front, signal lights and tail-lights above bumpers and exhaust tips under the number plate in the rear.

The 3.8 litre cars have leather-upholstered bucket seats, an aluminium-trimmed centre instrument panel and console (changed to vinyl and leather in late 1963), and a Moss four-speed gearbox that lacks synchromesh for first gear (“Moss box”). Optional extras included chrome spoked wheels and a detachable hard top for the OTS. A 2+2 version of the coupe was added in 1966. The 2+2 offered the option of an automatic transmission. The body is 229mm longer and the roof angles are different.

The roadster and the non 2+2 FHC (Fixed Head Coupe) remained as two-seaters. Following the Series 1 there was a transitional series of cars built in 1967–68, unofficially called “Series 1½”, which are externally similar to Series 1 cars.

Due to American pressure the new features were open headlights, different switches, and some de-tuning (using two Zenith-Stromberg carburettors instead of the original three SUs) for US models. Some Series 1½ cars also have twin cooling fans and adjustable seat backs. Series 2 features were gradually introduced into the Series 1, creating the unofficial Series 1½ cars, but always with the Series 1 body style.

A United States federal safety law affecting 1968 model year cars sold in the U.S. was the reason for the lack of headlight covers and change in switch design in the “Series 1.5” of 1968. An often overlooked change, one that is often “modified back” to the older style, is the wheel knock-off “nut.” U.S. safety law for 1968 models also forbid the winged-spinner knockoff, and any 1968 model year sold in the U.S. should have a hexagonal knockoff nut, to be hammered on and off with the assistance of a special “socket” included with the car from the factory. This hexagonal nut carried on into the later Series 2 and 3.

Our Jaguar E-Type Sieres I 3.8

This Jaguar E-Type Series 1 3.8 Litre was originally manufactured on 31st May 1962. The car was distributed through Henlys Limited in London to dealer “Kingscote & Stephens” in Gloucester.

First owner was a Mr MC Toombs from Norton, Gloucester. The car was delivered as fixed head coupe and right hand drive and shining in a beautiful shade of “Carmen Red” – exactly the same as it is today.

The car is currently registered in the U.K. with the original registration number “6691 FH” being active on the car. According to the Heritage Certificate, the engine number matches the car. During a comprehensive restoration the often failing Moss-box was upgrated to a more reliable and synchronized five-speed gearbox.

The car has a very nice panelfit and the quality of the paintjob is very high. The period correct Webasto sunroof fitted to this E-Type makes the combination ultra-rare. With the car we have a great history file with old invoices and MOT certificates. This is a great driver in fantastic condition and ready to be enjoyed.

This Jaguar E-Type Series I is for sale. Please don’t hesitate to contact us for further details.