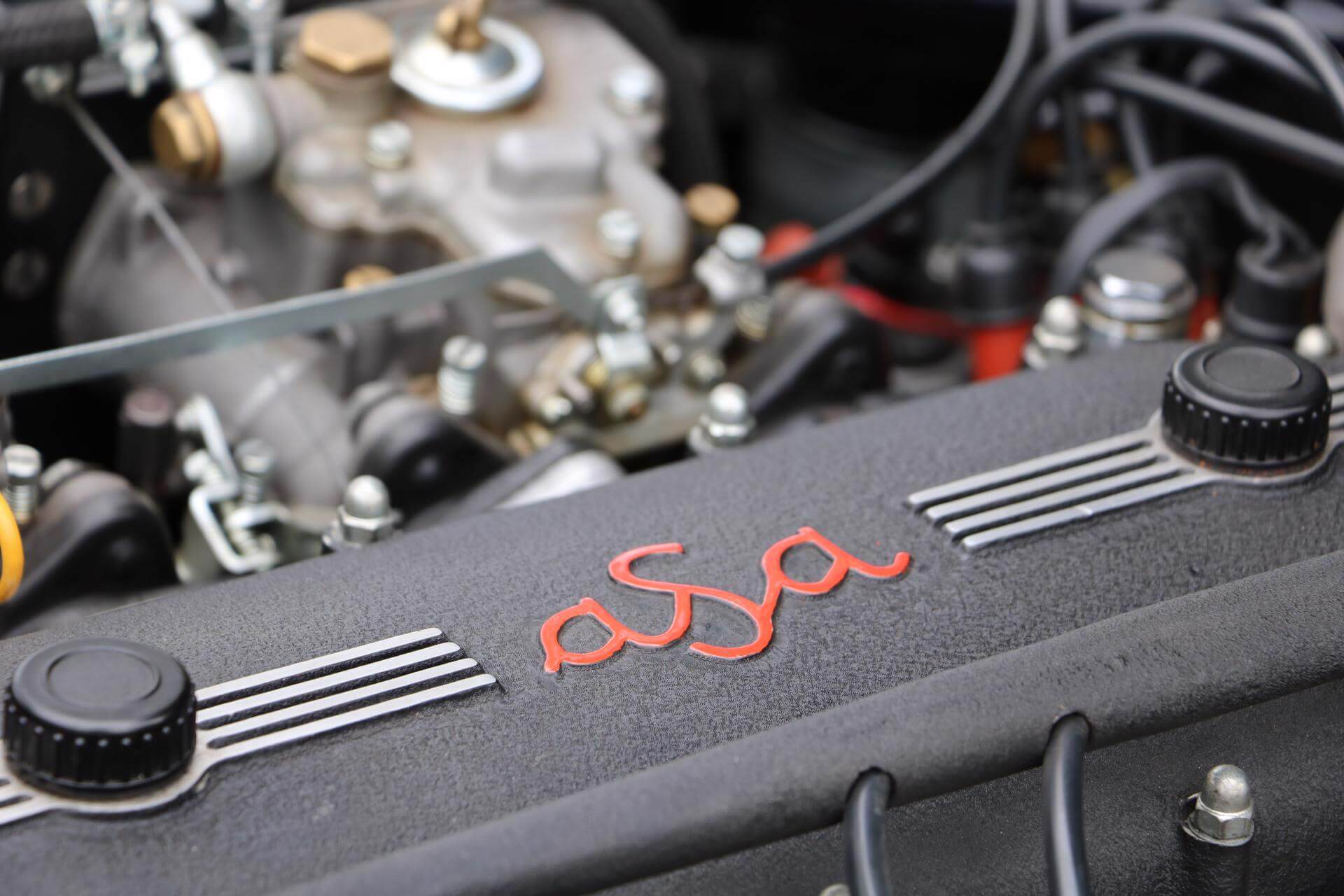 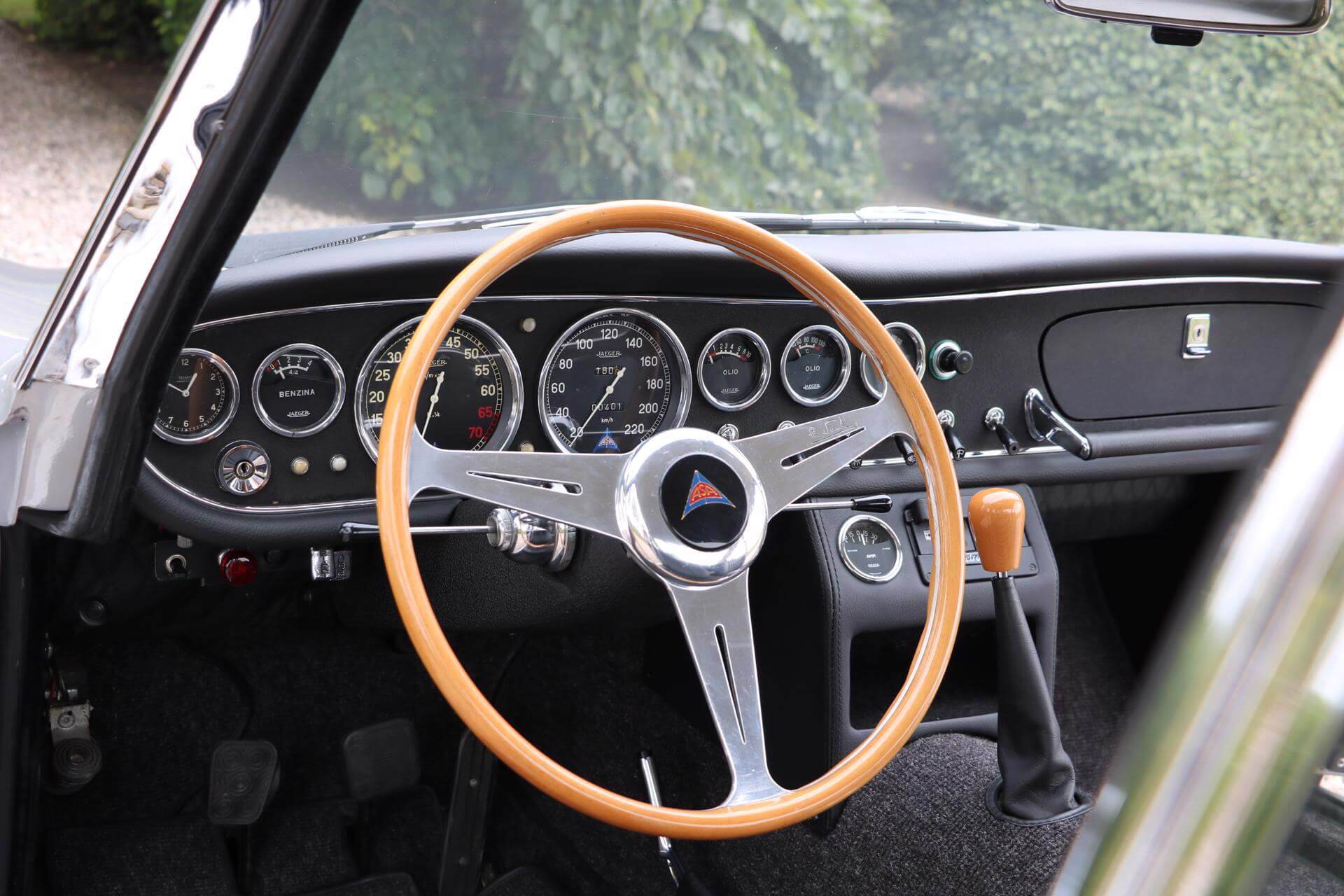 SOLD!
One of only 90 examples produced
Four owners from new
Award winning restoration in Switzerland
Known history, ready to be enjoyed

The ASA 1000 GT originated in a late 1950s experimental project by Ferrari engineers to create a less expensive, compact alternative to existing Ferrari GT cars. This project was designated “854” by the factory (for 850cc, 4 cylinders), however it was commonly but unofficially named “Ferrarina,” meaning “Little Ferrari”. The “Ferrarina” engine was derived from a late 1950s experimental inline-4, designated Tipo 122. This was basically a four-cylinder, 850 cc slice of a Colombo V12 from a Ferrari 212, with a bore and stroke of 65 x 64mm and supplied by two Weber 38DCO carburetors. The Tipo 122 engine produced 68 horsepower at 7000 rpm. The Tipo 122 was followed by the more powerful and slightly higher displacement Tipo 125 and 126 engines. The Tipo 126 engine displaced 973 cc and produced 86 horsepower at 7000 rpm. These engines were tested in the “Ferrarina” prototype, a 2-door notchback coupe on a chassis with a Pininfarina body, which was used by Enzo Ferrari as his personal transportation for some time in the late 1950s. The final engine design was completed in 1960 as the Tipo 141, with 1.032cc displacement, bore and stroke of 69 mm x 69 mm, a single overhead cam and two Weber 38DCOA carburetors. According to Ferrari’s records, this engine produced 100 horsepower at 7200 rpm with a 9:1 compression ratio.

Following Ferrari’s development work on the 854/”Ferrarina” prototype, a new prototype called the “Mille” (“one thousand” in Italian) was shown at the 1961 Turin Auto Show on the Bertone stand. The Mille was an entirely new car based on the 854 project, with 2-door fastback coupé bodywork designed by Giorgetto Giugiaro at Bertone. Although this prototype had no Ferrari badging, its design echoed contemporary Ferrari GT models and the origin of the design within Ferrari was well publicized. Despite positive publicity and official support of the project from Ferrari, at the time of the Mille’s debut there were no plans for Ferrari to mass-produce the design. Ferrari engineers had planned around annual production of 3000-5000 cars, which would sell for approximately US$2600 each. Not only was the Ferrari factory inadequate for this kind of volume production, Enzo Ferrari was unwilling to expand it in order to produce the Mille. Even before the Turin debut of the Mille, Ferrari had begun searching for another company that would buy the design and bring it to market.

Enzo Ferrari entrusted the production to the Turinese industrialist De Nora family. The car was manufactured by a newly formed company called ASA (Autocostruzioni Società per Azioni). The ASA 1000 GT production version, almost unchanged from the “Mille” prototype, was officially introduced at the 1962 Turin Auto Show. Despite this debut, due to production difficulties series production of the 1000 GT did not begin until 1964. The production 1000 GT used the 1032cc Tipo 141 Iine 4 engine fitted with 40DCOE9 carburetors. It produced a stated 91 horsepower at 6800 rpm, a HP/Litre ratio better than the contemporary Ferrari 275 GTB! Other sources report an output of 95.6 horsepower 7000 rpm. Production cars used a tubular spaceframe chassis designed by Giotto Bizzarrini, based on the Ferrari 250 GTO. It was equipped with double wishbone front suspension and a live axle at the rear. Both front and rear of the car were equipped with coil springs, tubular dampers, an anti-roll bar and disk brakes. The coupe was bodied in steel with aluminum hood and trunk lids and weighed 780 kg dry.

Little is known over the first years of this ASA 1000 GT. But at a certain point the car was imported into Germany and it’s believed the car had only four owners from new. After the car was imported into Switzerland in 2008, the car was restored to concours condition from 2008 to 2014 to specialists in Lugano, Switzerland, for a cost totalling CHF 112,400. Some modifications were done such as an oil cooler, long-range auxiliary lighting, a Tripmaster and a flexible map light in the cabin. It comes with its three keys and the official plaque which commemorates the ASA’s team participation at the 1965 Milan-San Remo.

The last owner imported the car into The Netherlands in 2017. He has driven the ASA alongside his 250-series Ferrari and comments that ‘the ASA is a proper little rocket compared to my Ferrari. Although horsepower is 40% of the V-12 and the weight of the car represents about 60%, it feels quite light and sporty, helped by its short wheelbase, very direct steering and the surefooted feel of the amazing chassis. The engine’s character is completely different from the V-12: make sure to keep revs well above 3,000 rpm (after properly warming-up), and you’re in for an amazing treat!’

Furthermore, the interior is brilliantly designed and surprisingly roomy, with a wood-rimmed wheel and a gorgeous dashboard lined with an array of green-lit Jaeger instruments. The harmony of the profile compares favorably with contemporary Bertone cars, such as the Iso Grifo.

As one of only 90 ASA 1000 GTs built, this immaculate example is a proper Italian sports car and one of the first examples of Giugiaro’s automotive design. The car has been maintained meticulously in the Netherlands and comes complete with all documentation and invoices.

This ASA 1000 GT is for sale. The car is currently registered in The Netherlands and will be sold with a new APK (like MOT/TUV/CT), a copy of the German registration papers and Swiss import papers and registration are on file. Please don’t hesitate to contact us for further details.