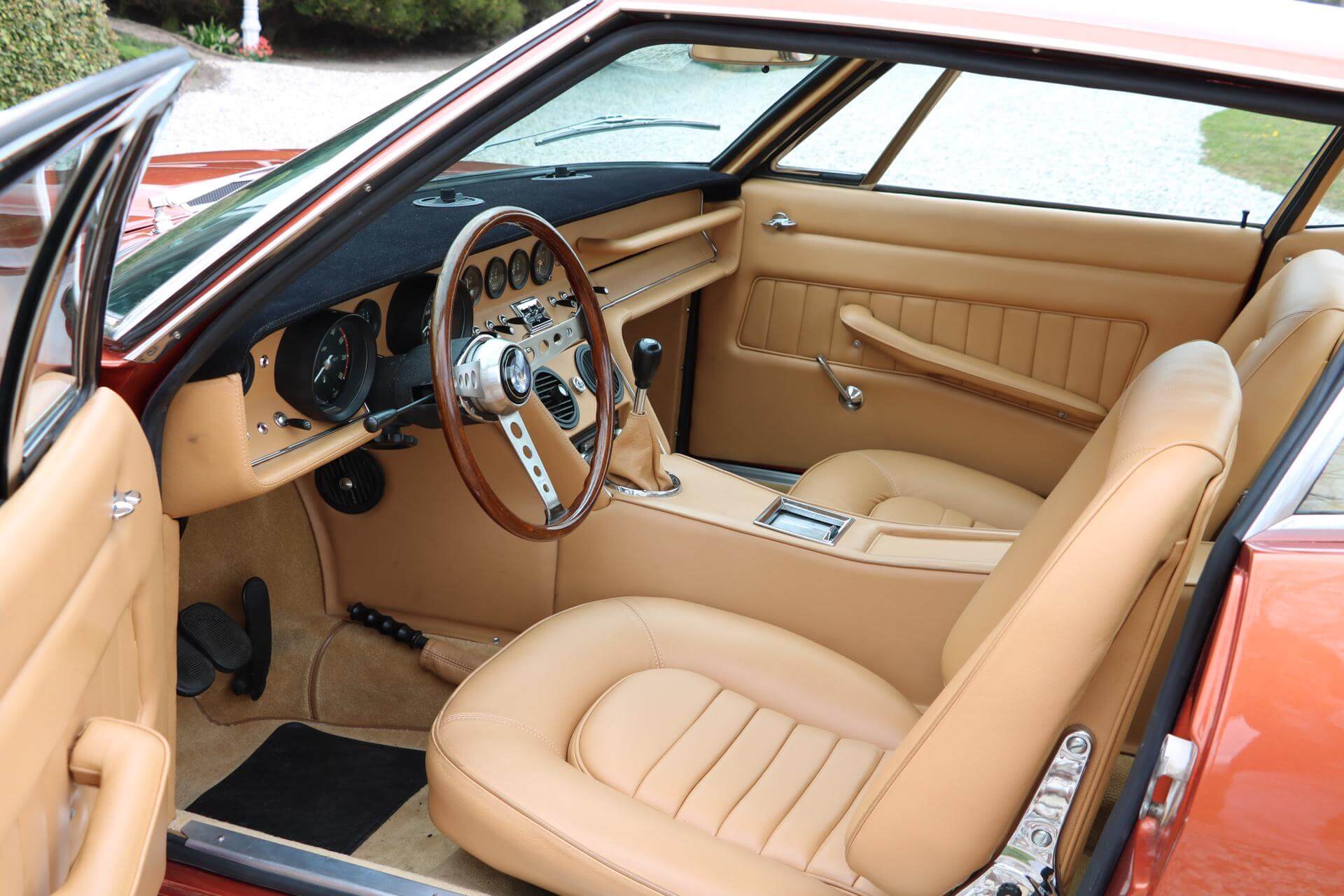 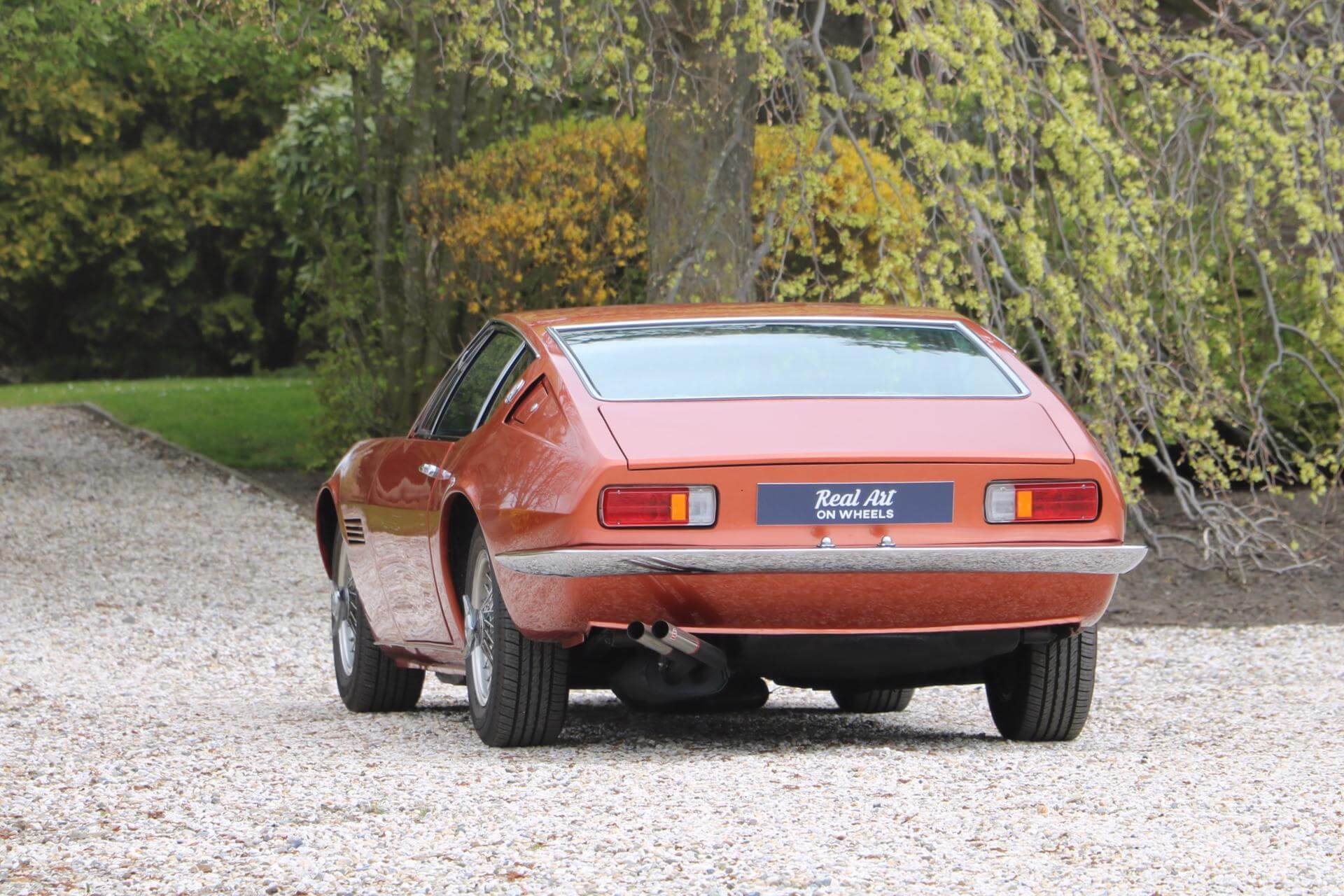 A strong contender for the ‘most handsome car of the 1960s’ title, the Maserati Ghibli debuted in coupe form at the Turin Motor Show in November 1966. Styled at Carrozzeria Ghia by Giorgetto Giugiaro and named after a Sahara Desert wind, the Ghibli rivalled the Ferrari Daytona for straight-line performance – its top speed was close to 275km/h (170mph) – while beating it for price and, arguably, looks. More than 4.5m long and 1.8m wide, the Ghibli occupied an inordinate amount of space for a mere two-seater, but perhaps the most startling aspect of its appearance was the height, or rather the lack of it. Dry-sump lubrication enabled the engine to be mounted deep in the chassis, permitting a low bonnet line, while limited suspension travel ensured that the tyres did not foul the wheelarches. The roofline fell away from the top of the steeply raked windscreen to the chopped-off tail, Giugiaro thus achieving a cabin lower than that of almost all the Ghibli’s contemporaries, albeit one with restricted headroom for rear passengers. Like the contemporary Mexico 2+2, the Ghibli used a shortened version of the Quattroporte saloon’s tubular steel chassis in its live rear axle form. In preference to the more complex suspension designs favoured by its rivals, the Ghibli used leaf springs and a single locating arm, a much more easily maintained arrangement. The power unit was Maserati’s powerful, four-cam, 90-degree V8, an engine derived from that of the 450S sports racer and first seen in road-going guise in the 5000GT, now producing 310 horsepower. This was used in 4.7-litre form up to 1970 when it was superseded by the 4.9-litre ‘SS’ version in order to meet ever more stringent emission laws. The Maserati Ghibli was in production from 1966 to 1973. A total of 1,149 coupes and 125 spyders were produced in this period. One of the most stunning motor cars ever made, the Ghibli was a worthy rival for the Ferrari 365 GTB/4 Daytona and represents exceptional value for money today, just as it did 40 years ago.

According to the Maserati Classiche documentation, this matching numbers Maserati Ghibli 4700 was ordered in “Rame Metallizzato” – a Copper metallic, Salchi code 106R49 with a tan leather interior. Exactly as the car is today. Production was finished in October 1968 and the car was delivered to Foreign Car City INC in New York. Little is known of it’s early history, but following the Ghibli Registry the car was offered for sale in California back in 1988. In 1989 the car was bought by a real enthusiast in Playa del Ray, California, who kept it for many years. We are informed this in 1 of only 153 cars equipped with the Borrani wire wheels from the factory. The car comes with the original 5 speed manual gearbox. Around 2015 the car was imported into Europe and send to Italy. In Italy the body has been repainted and the interior has been retrimmed, both in original factory color combination. This matching numbers car is complete with Maserati Classiche documentation. The car is ready to be enjoyed. We offer the car for sale with a valid Dutch registration and APK.

This Maserati Ghibli Coupe is for sale. Please don’t hesitate to contact us for further details.