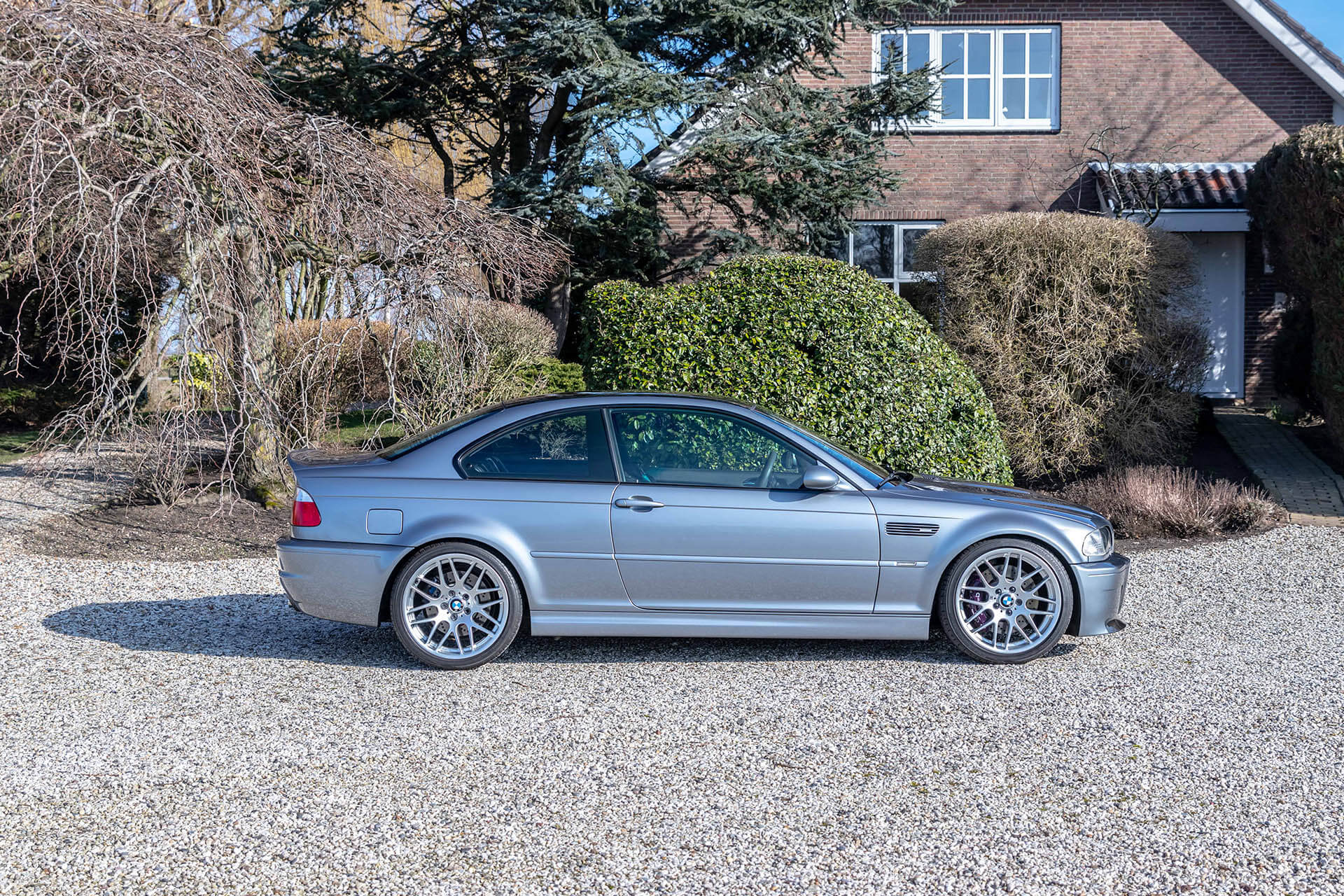 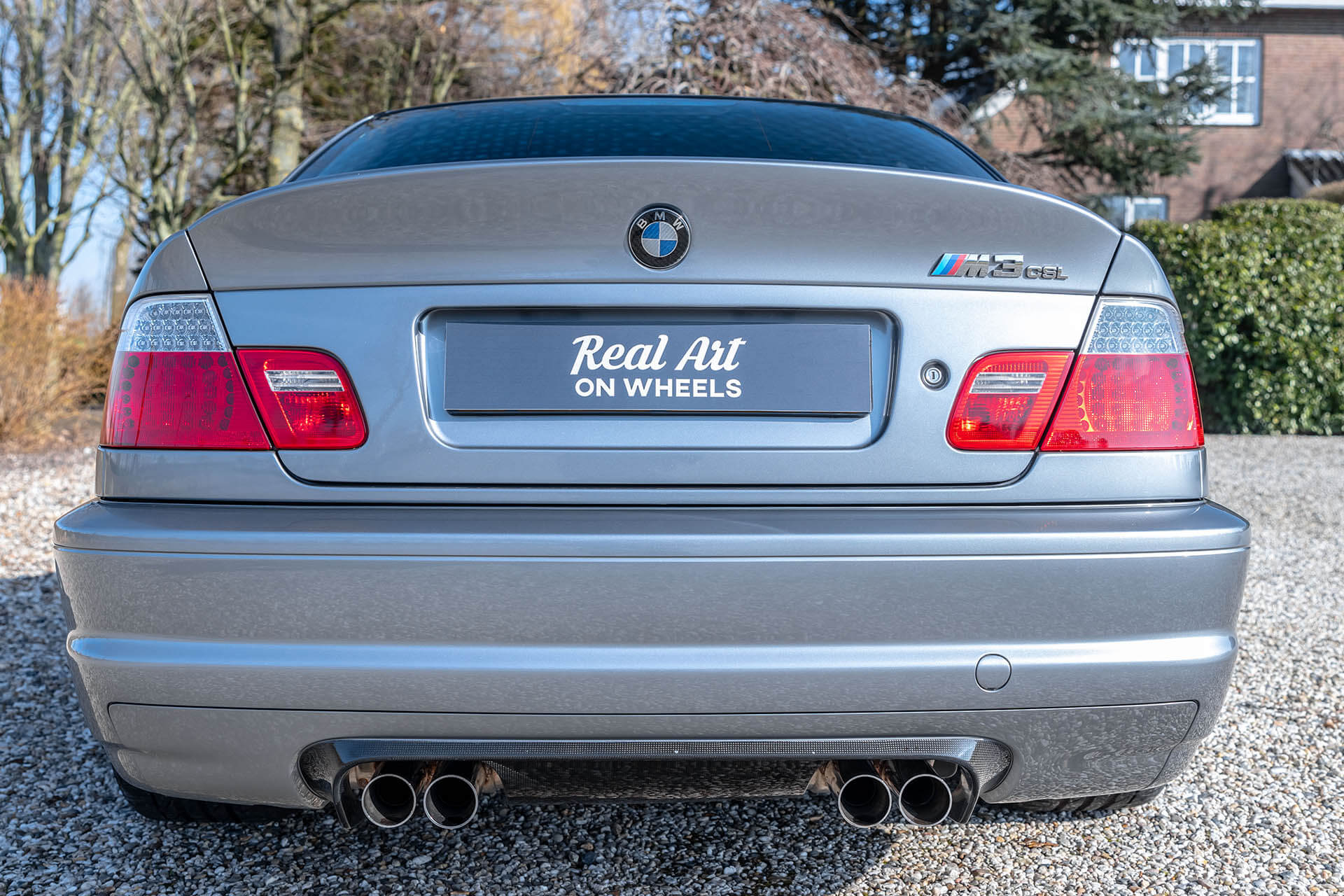 SOLD!
The ultimate BMW M3: the Coupe Sport Leightbau
Desirable colours
Ready to be enjoyed
Currently registered in The Netherlands

The BMW M3 CSL was a limited version o the BMW M3 (E46), with only 1.383 examples produced for its 2004 model year run. The CSL was never released into th North American market, and was only available in two colours: Black Sapphire Metallic and Silver Grey Metallic.

As its name suggest, an emphasis was put on reducing weight. The BMW M3 CSL has a curb weight of 1.385 kg, 110 kg lighter than the regular M3. The CSL features many weight saving technologies taken from BMW’s Formula One racing applications. A large production of the M3s sound insulation has been removed, aong with electric seats and navigation systems. The CSL’s unique body pieces are all crafted from carbon fibre reinforced polymer. Glass-reinforced plastics are used throughout structural points in the car. The standard rear windows was replaced with one made from thinner glass. Although the CSL loses a considerable amount of curb weight from its original version, the focus was put on strategically reducing or moving the weight in the car rather than the raw amount of weight that could be lost. This is to retain the ideal 50:50 weight distribution characteristics the E46 has. For example, the roof is constructed from carbon fibre reinforced plastic. While this only reduces the curb weight of the car by 7 kg, it lowers the centre of gravity of the car and decreases body flex.

In order to improve the handling ability of the car, the entire suspension system was further refined. Specially developed racing springs and dampers were given to the CSL, and a tightened steering ratio improved responsiveness. The braking system was also improved with larger front floating rotors and larger pistons in the rear calipers; front calipers were the same as the standard M3 but with a larger calliper carrier to allow for the larger rotor. Rear discs are M3 standard.

The CSL was given a retuned dynamic stability control system with a “M track mode” setting that allowed the car to be pushed to its absolute limits before being activated. Top speed was limited but on production of a current Motorsport licence, factory ordered cars could be requested with this restriction removed.

The engine used in the CSL had increased output over the regular S54 by 17 horsepower over the European M3. This is due to the use of sharper profile camshafts, a bigger air intake with carbon fibre manifold, a refinement of the exhaust manifold, and slightly different exhaust valves.
The CSL also had various aesthetic modifications over the standard M3. It received an aerodynamic lightweight body kit which included carbon fibre front splitters that improved down force at high speeds by 50%, as well as a carbon fibre rear diffuser. The front bumper had a distinct hole that is used to draw cool air into the newly designed air intake. The trunk floor cover was made of lightweight fibre-board. The trunk lid was redesigned to incorporate a raised lip, unlike the standard M3 where one is simply added onto a flat trunk. The CSL was sold with distinct 19-inch lightweight cast BBS alloy rims that came with Michelin Pilot Sport Cup semi-slick racing tyres. The interior of the CSL is redesigned with a sporty weight-saving theme. The CSL obtains fibreglass front racing bucket seats, and fibreglass backed rear seats. The center console, door panels and trim, and head-liner are all formed from carbon fibre, and the steering wheel is redesigned with cruise control, stereo, and phone controls removed to include just a single button that activates the M track mode.

This BMW M3 CSL is tasefully ordered in Silver Grey Metallic. Originally, this CSLwas delivered into Japan. Being an original left hand drive car, she was a few years ago acquired by a Dutch enthusiast who imported her into The Netherlands. After being imported the car was completely checked and the gearbox overhauled. The car is equipped with special Recaro racing seats. Currently registered in The Netherlands with valid APK (like MOT/TUV/CT), this car is ready to be enjoyed.

This BMW M3 CSL is for sale. Please don’t hesitate to contact us for further details.