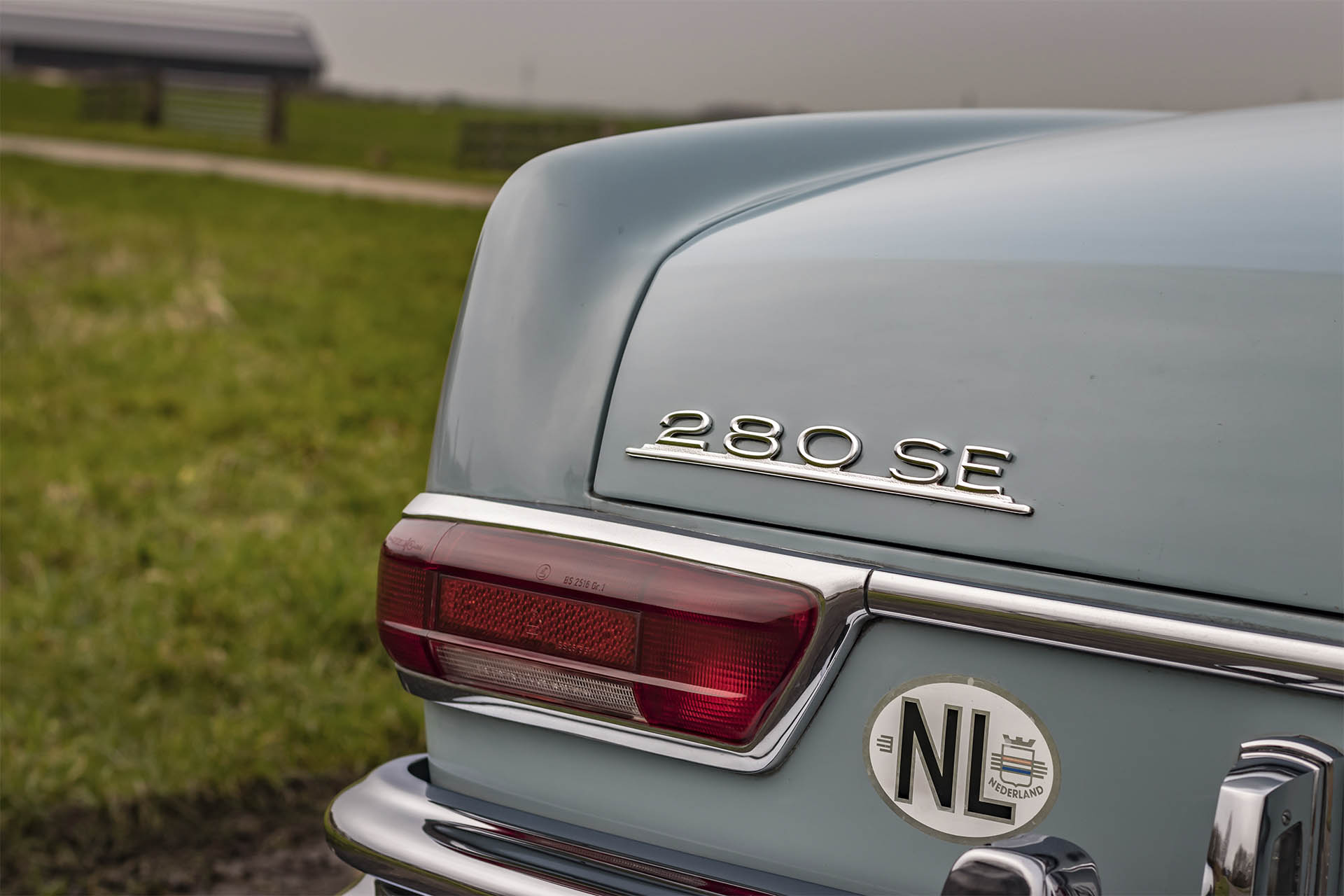 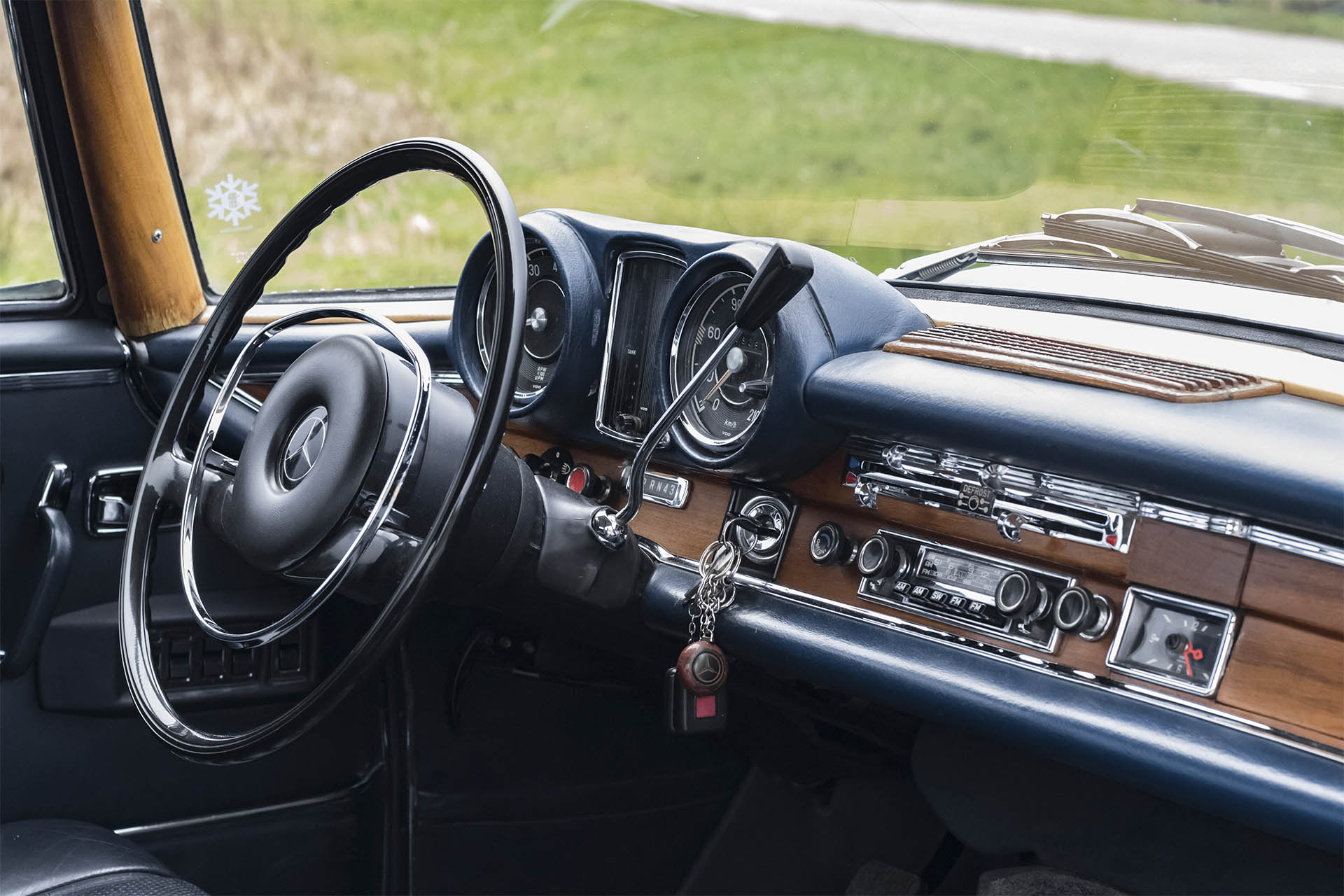 SOLD!
Mercedes ultimate model in the 1960s
Desirable color combination
Original leather seats
Registered in The Netherlands and ready to be enjoyed

Production of the replacement for the two-door Pontons began in late 1960, with the coupe making its debut at the 75th anniversary of the opening of Mercedes-Benz Museum in Stuttgart in February of the next year (1961). The convertible followed at the Frankfurt Auto Show. Almost identical to the coupe, its soft-top roof folded into a recess behind the rear seat and was covered by a tightly fitting leather “boot” in the same color as the seats. Unlike the previous generation of two-door Ponton series, the 220SE designation was used for both the coupe and convertible; both received the same version of the 2.195 cc engine. Options included a sliding sunroof for the coupe, automatic transmission, power steering, and individual rear seats.

In March 1962, Mercedes-Benz released the exclusive two-door M189-powered 300SE. Like the 300 sedan, it was based on the W111 chassis but shared both Daimler’s top-range 2.996 cc fuel-injected engine and the unique W112 chassis designation, efforts on Mercedes’ part to distance it from the maker’s modest W110 and W111 lineups and link it to the prestigious W188 300S two-door luxury sports tourer. It was distinguished by a chrome strip, and featured air suspension and a higher level of interior trim and finish.

In summer of 1965 Mercedes-Benz launched replacements for both W111 and W112 sedans, the W108 and W109 respectively. With the tailfin fashion well eroded by the mid 1960s, the new design was based on the restrained W111 coupe, widened and squared off. Work on a future new chassis that would fully replace the Ponton-derived W111/W112 and W108/W109 was well under way. With a concept car of the first S-Class was shown in 1967, Daimler declined to develop a two-door W108/W109 vehicle, instead continuing production of the aging W111/W112 with modest changes. The 220SE was superseded in early autumn 1965 by the 250SE, which featured the new 2.496 cc engine. Producing 150 horsepower (110 kW) at 5.500 rpm, it gave the vehicle a significant improvement in top speed, 193 km/h (120 mph), and 0–100 km/h acceleration 12 seconds. Visibly the only changes affected the new 14-inch rims, which came with new hub cabs and beauty rings accommodating the larger disk brakes and new rear axle from the W108 family.

In November 1967 the 250 SE was superseded by the 280 SE. It was powered by the new 2.778 cc engine, which produced 160 hp (120 kW) at 5.500 rpm. Top speed was hardly affected, but acceleration improved to 10.5 seconds. Inside the car received a wood veneer option on the dashboard and other minor changes, including door lock buttons and different heater levers. The hubcaps were changed yet again to a new one piece wheelcover, and the exterior mirror was changed.

Despite its smaller engine, the 280 SE could outperform the early 1950s M189 powered 300 SE, resulting in the more expensive model’s retirement. The coupe and cabriolet retained their shared model designation until replaced by a new-generation chassis in 1968.

This Mercedes-Benz 280 SE Coupe was originally supplied to a customer in the United States of America, definately in a dry state regarding the beautiful original condition she is today. In 1992, the car was imported into The Netherlands and was in collector’s hands ever since. After this Mercedes-Benz 280 SE Coupe was imported the bodywork was repainted with all windows out to a very high standard.

The car is completely rust- and accidentfree. The interior has a beautiful charming patina, the dark blue leather matches the light blue exterior of the car very well. The chrome is in generally good condition. The car runs, brakes and shifts very smooth. Currently registered in The Netherlands with a valid APK (like MOT/TUV/CT): the car is ready to be enjoyed.