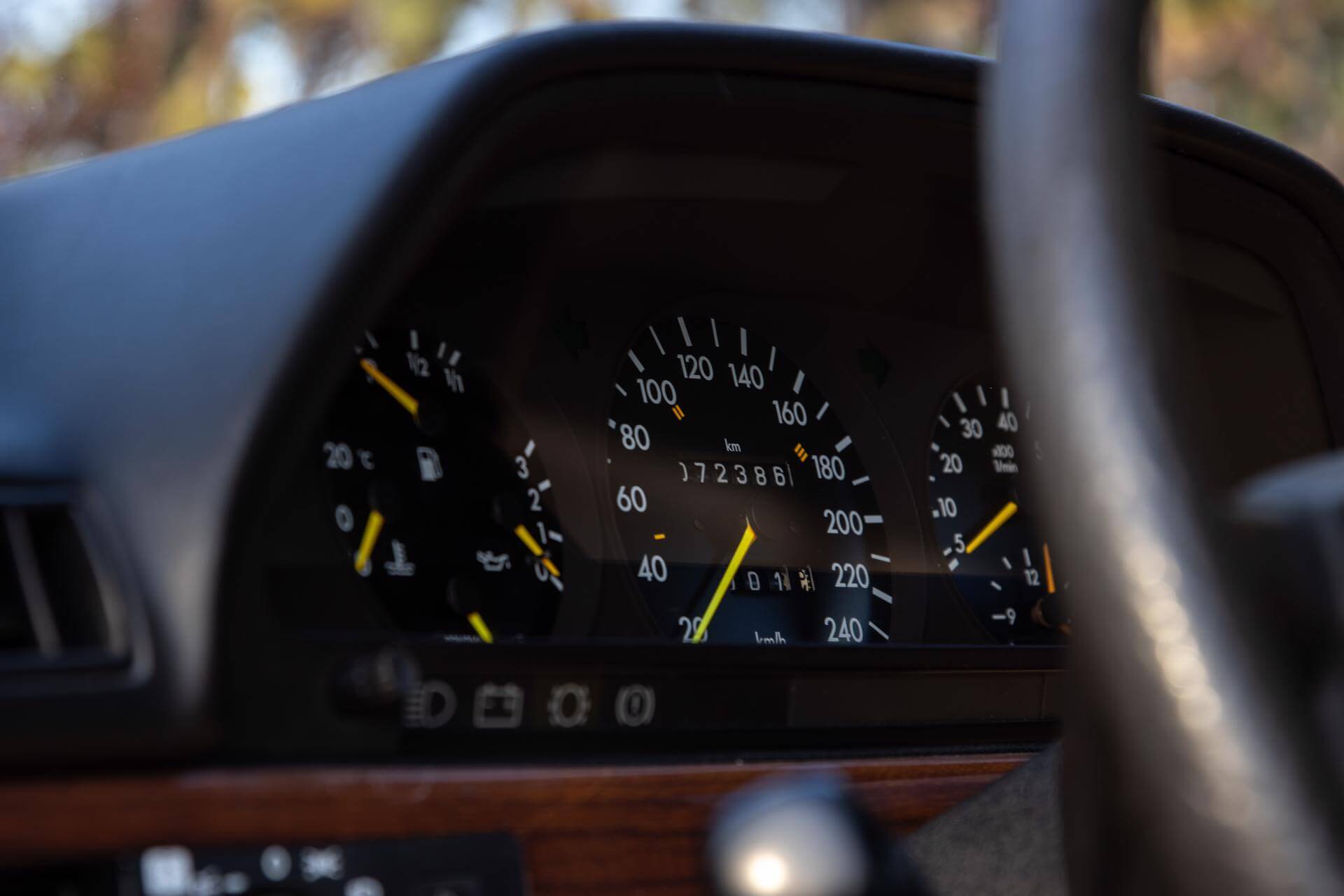 In September 1979, the second series of the Mercedes-Benz S-Class was introduced. S for “Sonderklasse”. The W1236 series replaced the W116 line. The car car featured improved aerodynamics and enlarged aluminum engine blocks. In Australia in 1981, the W126 S-Class won Wheels magazine’s Car of the Year award. The W126 was manufactured from 1979 through 1991 with a mid-cycle update. Coupé models based on the S-Class were reintroduced with the W126 (380/500 SEC). Total sales of the W126 S-Class sedans reached 818,036 units, with an additional 74,060 coupes sold.

In December 1980, the W126 introduced a driver side airbag, as patented by Mercedes-Benz in 1971, as well as passenger side airbags (in 1988), seat-belt pretensioners, and traction control. It was the first production car to feature an airbag standard, and as late as 1991 there were only a few other manufacturers in Europe who offered an airbag. The interior featured additional courtesy and reading lamps, along with heated seats and a more advanced climate control system. A four-speed automatic transmission was standard.
Although the top of range Mercedes-Benz 450SEL 6.9 of the previous generation was not directly replaced, the W126 carried forward the hydropneumatic suspension of the 6.9 as an option on the 500SEL. A new cruise control system was offered as well. Succeeding the roadster based coupes, the W126 introduced a two-door variant, the SEC coupé. The W126 S-Class received a mid-cycle update in 1985 with exterior modifications and engine upgrades occurred.

Powerplants on the W126 S-Class included straight-6 and V8 engines. Most sales came from the diesel model in Europe and straight-six models in the United States, although the V8 models were praised by contemporary journalists. During the W126 mid-cycle update in 1986, both the straight-6 and V8 engines were upgraded in several models to different displacement levels (six-cylinder upgraded from 2.8 L to 3.0 L, eight-cylinder upgraded from 3.8 L to 4.2 L, and 5.0 L to 5.6 L).

This Mercedes-Benz 380 SE Limousine was ordered by Mr Koeck from Roehrnbach, Germany. In the file we have the original order confirmation dated September 28, 1979. The car was ordered in Sonderlackierung “875 Mangogrün” with cloth upholstery in beige. Another expensive option was the Becker Europa radio. Exactly the combination the car is today. The car is in highly original, unrestored condition and drove a mere 72,380 KMs.

With the car we have a great file of documentation, including original salesorder, invoice, service records and the books. The first owner kept the car until she was exported to The Netherlands back in 2009. At that moment the car had driven 56.790 KMs. Over the last 10 years the car was with 1 careful owner who added another 15.000 KMs to the car. The car runs, brakes and shifts very smooth. Currently registered in The Netherlands with a valid APK (like MOT/TUV/CT): the car is ready to be enjoyed.

This Mercedes-Benz 380 SE is for sale. The car is ready for inspection in our showroom, based in the Amsterdam Lake District. Please don’t hesitate to contact us for further details.