Did you know that Porsche initially stopped the production of the Carrera GT? What is now known as one of the best cars ever made, once was stopped in production to focus on the build of the Porsche Cayenne. The SUV market had taken Porsche’s interest, and the company decided shift the focus to this area. All engineers were taken from the GT, and put to work on the Cayenne with the GT only being in the testing phase.

Looking back, we can happily say that Porsche made the right decision to continue their passion project later on, and Jeremy Clarkson from Top Gear agrees with us.

Porsche put the wheels back in motion

After the project was put on hold in 1999, Porsche kept it alive by showcasing a prototype of the Carrera GT at the Paris Motor Show in 2000. The 5.5 liter V10 stole the show, and Porsche decided to revive the project and started selling the first GTs in 2004, with a 5.7 liter V10 engine! 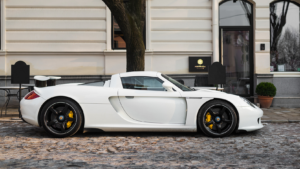 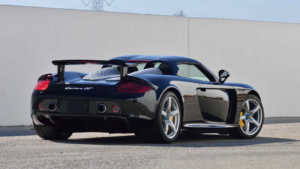 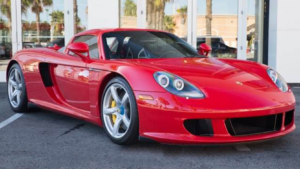 With stricter airbag regulations in the United States, it was no longer profitable to produce the GT in 2006, so Porsche stopped the production at 1270 GTs, making the car an even bigger collector’s item.
At Real Art On Wheels we currently have a Carrera GT, which is for sale. If you’re interested, please enquire about the details.

The end of an era

With more and more regulations, many car lovers say that the Porsche Carrera GT is the last supercar of a generation, and according to many people the very best car ever. Wanting to get a glimpse of what it’s like to drive it? Check out the video below or visit our showroom.

Celebrate 70 years of Porsche at Real Art On Wheels

Porsche is one of the most iconic car brands worldwide, and it celebrates its 70th anniversary this year. At Real Art On Wheels we celebrate this milestone from November 16th until December 28th.