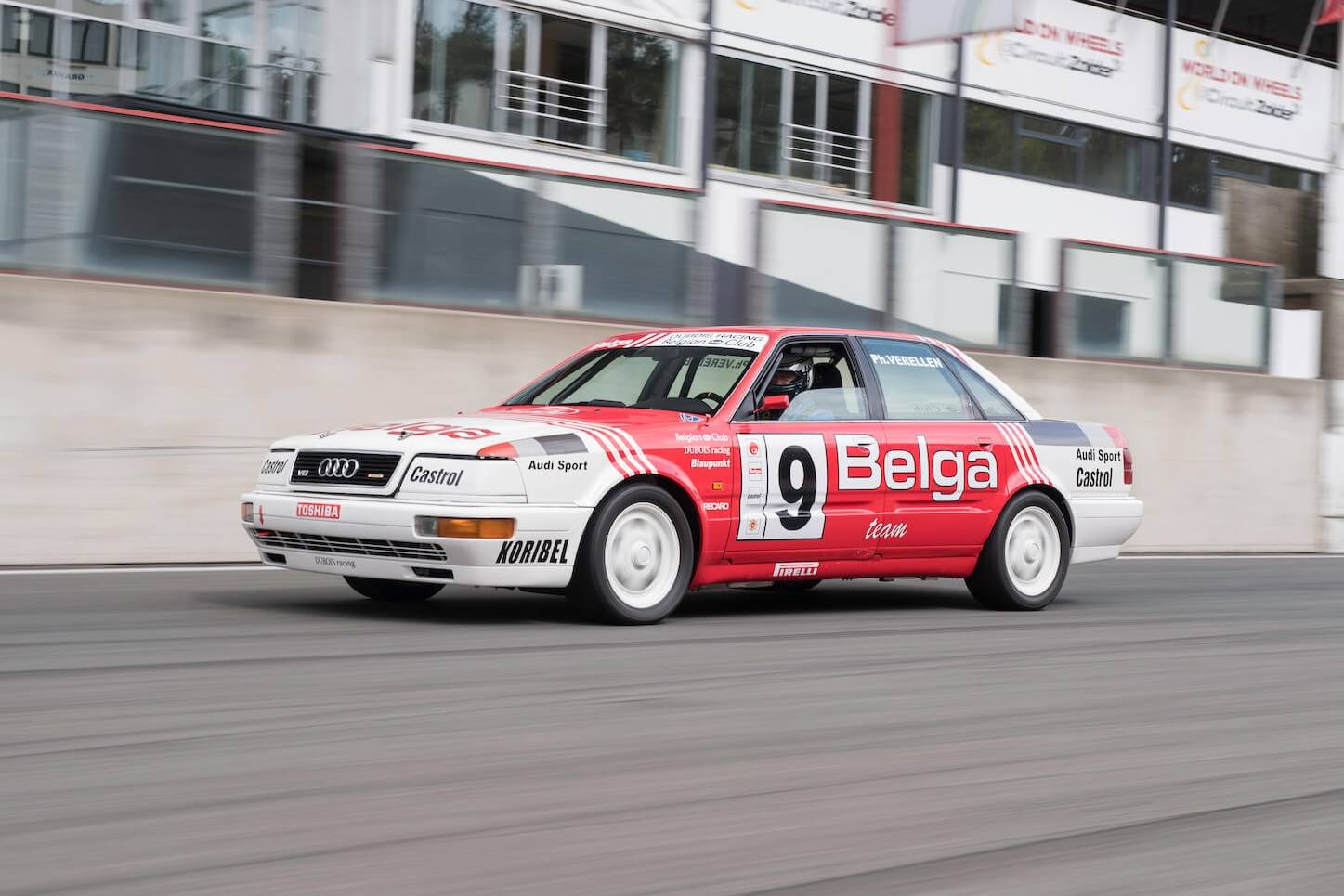 This Audi 200 V8 Quattro was built to the specification of Belgian star Philip Verellen following his return to the Belga team in 1990. Verellen had been discovered by the ‘Belga Stuurwiel’, a promotional programme run by the Belga cigarette company to find talented young drivers. From the selected drivers participating in the 1986 ‘Stuurwiel’ at Zolder, the jury had real difficulties in deciding the winner from the four best candidates, but eventually they chose Philip Verellen, who was not only the fastest but also the most consistent. He had finished 2nd in the ‘Stuurwiel’ in 1985.
At that time Philip Verellen was 23 years old and working as a journalist for the magazine, ‘Autokrant’. His reward was the opportunity to race in the Belgian saloon car championship in 1986 with the Belga team, driving a BMW 325i prepared by the Antwerp-based BMW dealership, Juma. The following year, driving a Ford Sierra Cosworth, Verellen finished 3rd in the Belgian Production Car Championship, and for the next couple of seasons he was always a contender for overall victory, finishing 4th in the championship in 1988 and 3rd in 1989.
In 1990, he joined the Belga team to contest the inaugural Belgian Procar Championship, driving one of the team’s two Audi V8 Quattros. Introduced in 1988, the Audi V8 Quattro was the German manufacturer’s flagship model. To promote the car, Audi developed a Group A version to contest the Deutsche Tourenwagen Meisterschaft (German Touring Car Championship), winning back-to-back drivers’ titles in 1990 and 1991. Boasting a specification unmatched by its smaller-engined rivals, on paper at least, the Audi V8 Quattro was the natural choice for both the DTM and Procar series.
The 1990 Belgian Procar season comprised 14 races over seven meetings at four circuits, and with three race wins to his credit – all at Zolder – Verellen finished 4th in the championship at the year’s end. Jean-Michel Martin was that year’s champion, driving a BMW M3 for Waterloo Motors. In 1991, still driving an Audi V8 for Belga, Verellen won only twice (on both occasions at Zolder) but was a more consistent finisher over the course of the season, standing on the podium on ten occasions, and ended up as Division 1 winner with 192 points to defending champion Martin’s 169. Verellen took the Procar chequered flag first on no fewer than five occasions in 1992, but a ‘DNF’ at Zolder cost him dearly and he lost the championship by 7 points to team-mate Pierre-Alain Thibaut.
A highly respected and versatile racing driver, Philip Verellen enjoyed a 15-year competition career that included entering Le Mans twice and the Spa 24-Hour race on several occasions. He raced a wide variety of cars, competing in the UK’s Rover Turbo Cup (in 1994, 1995, and 1996) and the Renault Spider Trophy (in 1997). A regular Belcar contender, he won the 2001 Belpro race at Spa Francorchamps driving a Chrysler Viper GTS-R. Philip Verellen died on 9th May 2002 following a serious illness.

This Audi V8 Quattro Belga Procar was discovered by Paul Verellen, Philip’s brother back in 2012. As a tribute to his late brother, he restored to completely original specification, just as it was driven in 1991. The bodywork was fully restored, the engine completely overhauled, and the odometer put back to zero. A lot of work went into the restoration, and Paul received much assistance from the people that worked on the original race car back in the days.

After two years of work, the project was finished. It was never intended to race the Audi, which has been restored mainly as a tribute to the late Philip Verellen. It was treated more as a museum piece, although fully operational.

With the car we have various articles relating to race victories and especially the 1991 championship win; a slection of period photographs; a file of restoration photographs and a valuation report confirming its condition after restoration.

This Audi V8 Quattro Belga Procar is for sale. Please don’t hesitate to contact us for more information.